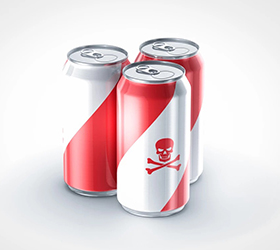 Artificial sweeteners or Non-caloric artificial sweeteners (NAS) are commonly added to food with increasing controversy regarding their potential ability to promote metabolic imbalances and lead to weight gain instead of weight loss and diabetes type 2. Unfortunately, many people see these drinks and additives as being healthy. The research shows the opposite

The first report on NAS interactions with the microbiome dates back to the early 1980s. Since then, diets containing non-caloric artificial sweeteners (including saccharin, sucralose, and aspartame) have been linked to gut dysbiosis and glucose intolerance even at relatively low doses (5–7 mg/kg/d, equivalent to an adult consuming two to three cans of diet soda per day).

A study of Splenda, a nonnutritive sweetener containing 1% sucralose, found that the substance impaired the growth of gut bacteria in rats. Ace-K, like sodium saccharin and sodium cyclamate, belongs to sulfonamides, a chemical class associated with antimicrobial activity. In previous studies, saccharin was recognised to enrich the biosynthesis pathway of lipopolysaccharides (LPS) of the mouse gut microbiome, which is a common trigger of inflammation and leaky gut. Studies have also shown different and healthier bacterial diversity for nonconsumers compared to consumers of artificial sweeteners.

In another experiment where commercial formulations of saccharin, sucralose, or aspartame were added to the drinking water of lean mice for 11 weeks all three NAS-consuming groups developed glucose intolerance. NAS was also shown to induce changes in gut microbiota previously observed in T2DType 2 diabetes; notably, the over-representation of gram-negative Bacteroides and under-representation of gram-positive Clostridiales. Another study of 800 healthy and prediabetics showed variability in their after meal (postprandial) glucose responses to the same foods attributed to differences in gut microbiota. While a study of 345 Chinese volunteers revealed that diabetics have a decrease in butyrate-producing bacteria and an increase in opportunistic pathogens relative to healthy subjects.

On the positive side, the sugar alcohol xylitol inhibits the growth of some negative bacterial species including Streptococcus mutans. It is used as a food additive to prevent dental caries and in rats fed a high-fat diet, xylitol improved lipid/fat metabolism. Dietary supplementation with low- or medium-dose xylitol significantly positively altered the fecal microbiota composition in studied mice.

So what are you having in your next drink??