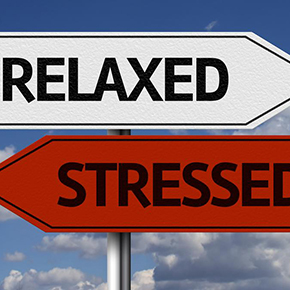 Persistently elevated cortisol levels have been closely tied to weight gain, increased abdominal fat, and other aspects of metabolic syndrome, a collection of things that includes obesity and pre-diabetes.

When cortisol is released in response to stress, it signals the body to shift energy production into overdrive. It’s a signal for organs and various tissues in the body to accelerate production of glucose, the sugar that fuels our muscles, by breaking down carbohydrates and protein. As part of its role in freeing up energy, chronic exposure to cortisol also increases cravings for high-sugar, high-fat foods, and increases the body’s resistance to insulin, the hormone that signals the body’s cells to absorb sugar.

In support of this in mice, stress increases cravings for energy-dense foods; in people, comfort- or stress-eating is a familiar phenomenon.

in addition consistent exposure to cortisol may re-wire the brain, for example, shrinking the pre-frontal cortex and bulking up the amygdala. Over time cortisol can increase the risk for depression and mental illness.