Acid and your gut 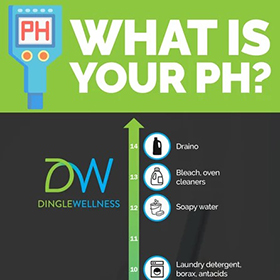 After initial breakdown by chewing, food is churned by the smooth muscles of the stomach and is broken down by hyrdochlooric acid and stomach juices (enzymes). The pH of the stomach is highly acidic, around 1.5 (1.0-2.5) due to the hydrochloric acid which helps to kill harmful microorganisms, denature protein for digestion, and help create favorable conditions for the enzymes in the stomach juices such as pepsinogen (Adbi. 1976, Martinsen et al 2005). Not to mention sending messages along the GI tract that everything is working well in the stomach. If the pH is too high, say 3 or 4 (more alkaline) then the system does not work and you end up with digestive and health complications.

The small intestine is more alkaline as the acid contents from the stomach are neutralised so that digestion and adsorption of carbohydrates, proteins and fats can occur. As the mixed juices (chime) from the stomach moves into the small intestine, the pancreas secretes sodium bi carbonate and the gallbladder releases bile which is produced in the liver, to make it slightly alkali to a pH of 7 to 8. Bile salts play an important role in the balance of the gut microbiota and like the pH in the stomach are important in controlling disease microorganisms entry into our system.

Further breakdown of protein and fat takes place, and absorption of nutrients through the use of enzymes which break down complex molecules into simpler ones. However, all enzymes need certain conditions, including pH to work. At pH’s that are not optimum, the enzyme becomes less efficient until it cannot work at all. In the small intestine, the enzymes that “work” there need an alkaline pH in order to have optimum working conditions. Inadequate acid neutralization in the small intestine likely interferes with nutrient absorption by diminishing further digestive enzyme activity (Borowitz et al 2015).

The more alkaline pH also favours the non-acid loving bifidobactria which produce short chain fatty acids (SCFA) such as acetic, propionic, and butyric acid, and hydrogen ions (Vernia et al 1988) which lower the pH of the food as it moves through to make it more acid, again for the more acid loving bacteria including lactobacilis species further down the large intestine. The large intestine absorbs water and salts, and stores the leftover material ready for excretion out of the anus is a little more acidic and favours the acidopholus species. The pH of the large intestine might go as low as 3.

The pH of the gut, right from the mouth to the anus is incredible important in determining the type of gut microbiota, gut health and your own health. In the stomach if it is not acid enough (no not too much acid) it sets of a chain of events that favours the wrong type of microbiota including helicobacteror and candida species known for causing stomach ulcers and other gut health problems as well as an overgrowth of lactobacillus which should not be there and lead to Stomach Bacterial Overgrowth (SBO). So optimal functioning of the gut relies on the optimal pH for that part of the GI tract. Even in the mouth if it is too acidic it favours lactobacteria, acid loving bacteria, which in the large intestine are really beneficial, but in the mouth contribute to tooth decay and periodontal disease. Similarly, if the pH in the small intestine is out of balance it contributes to an overgrowth of lactobacillus and a condition called Small Intestinal Bacterial Overgrowth (SIBO). It all comes down to the pH and getting it right from the start.