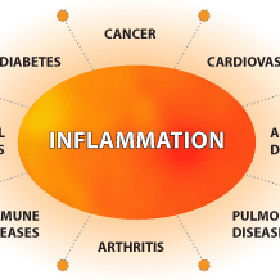 Inflammation is literally the body “on fire” and is a primary immune mechanism response of the body to a range of noxious stimuli.  This can include infectious agents, such as bacteria or virus, oxidation or acidosis, damaged or diseased tissues; however, the inflammatory response can also occur in response to other external or internal cues 1. Inflammation is essentially the body’s first line of defence in common acute conditions 2.

The main function of inﬂammation is a short term response to resolve infection and to repair the damage in order to achieve homeostasis equilibrium balance back to the body. The ideal inﬂammatory response is therefore rapid and destructive, yet speciﬁc and very limited. The release of inflammatory mediators, predominantly from activated leukocytes that migrate into the target area and proteins called cytokines attack the threatening germ and repair damaged tissues. This is the reddening and swelling you see around any infected or injured area. most of us are familiar with: redness, heat, swelling, and pain associated with inflammation. These symptoms are created by the activity of immune cells working to break down injured and dying tissues so that new, healthy ones can replace them.

Unfortunately, we have created a situation in our lives where we now suffer from chronic low level inflammation over decades of our lives as a result of our unhealthy and unbalanced lifestyles and diet. Chronic inflammation is being shown to be involved in the onset and the development of most if not all chronic illness that are now at epidemic proportions in our society. These include atherosclerosis (damaged and blocked arteries), heart disease, stroke, obesity, neurodegenerative diseases, depression, Alzheimer’s, Parkinsons Disease, thyroid disorders, diabetes, asthma, autism, arthritis, celiac disease, eczema, psoriasis, Multiple Sclerosis, lupus, migraines, periodontal disease, sleep apnoea, chronic kidney failure and cancer. It is a long list but it is only the main ones I have mentioned.

Even though chronic inflammation in the body is hard to detect there are some common symptoms to look out for. These include the following:

Chronic pain in the joints and/ or muscles

To judge the level of inflammation in individuals, a number of markers have been identified that are directly associated with inflammatory processes 3.4.5. C‑reactive protein (CRP), interleukin‑6 (IL‑6), fibrinogen, and tumor necrosis factor‑alpha (TNF‑a) are the most common markers that the medical system uses, with CRP leading in terms of assessing risk. Each marker has a different role in the inflammatory process and the development of chronic illness and are also often linked to each other. For example, IL6 plays a central part in the inflammatory process and is known to be linked to the production of C-reactive protein (CRP) in the liver.  CRP is commonly used to monitor inflammatory states as it is secreted by the liver in response to a variety of inflammation, trauma and infection and decreases rapidly with the resolution of the condition. If the person has high C reactive protein and does not have an infection of some sort, then they probably have chronic inflammation. It is like the body is trying to fight off an illness all the time rather than just short term acute situations. It becomes exhausting for the body and is also likely to result in some long term damage.

The inflammatory process is driven by the immune system in your body. Therefore, in order to reduce the incidence of disease you must reduce inflammation, and to reduce inflammation you must identify and eliminate the immune system trigger(s). The typical approach of allopathic medicine is to treat the symptoms of the disease itself or the immune system (immune-suppressive drugs) or inflammation (anti-inflammatory drugs) directly without addressing the underlying cause of the disease. But not dealing with the underlying causes. Sustainable health looks at identifying and eliminating the sources of the inflammation to address the situation at its cause. While I will leave much more of the detail to the next months edition some good examples of anti inflammatory nutrients include turmeric, probiotics, vitamin C and D and Magnesium. While physical activity, meditation and strategies to de-stress are all anti inflammatory. Get the idea.

CVD is no longer considered a disorder of lipid (fat) accumulation or elevated cholesterol, but rather a disease process characterized by low-grade inflammation of the vascular (artery) lining and an inappropriate wound healing of the blood vessels 5. It is similar to a low-grade wound on your skin that does not heal, but it is on the inside. There is now extensive and rapidly growing evidence that inflammation, which is what you get with every wound, plays a critical role in all stages of CVD 6,7,8,9. That is why if you treat the cholesterol you are treating the symptoms, yet if you treat the inflammation you are treating the underlying cause of the disease. To highlight the direct link in one study weekly injections of the cytokine (inflammation protein) given to mice caused a 2.5 fold increase in atherosclerotic lesions, that is 250% 10.

Since half of all myocardial infarctions (heart attacks) occur in individuals that display normal plasma lipid (cholesterol) levels, using markers of inflammation is much more effective to detect those at risk of CVD before its onset 4,5,11. Atherosclerosis (arterial plaque build up also known as artheriosclerotic vascular disease or ASYD) is a chronic inflammatory disease occurring in the innermost layer of the artery, the intima, where it thickens resulting from a build up of plaque. An injury or oxidation (free radicals) activity damages the blood vessel lining and induces an inflammatory response resulting in the adhesion of platelets and build up of macrophages (a type of white blood cell that swallows and destroys damaged tissue and infectious agents) and white blood cells at the site of injury. The inflammatory response, is mediated by activated T cells, macrophages and mast cells and produces cytokines (chemical messengers). Modified (through oxidation or enzymes) low‑density lipoproteins in the arterial intima initiate an inflammatory response in the arterial wall that leads to a cascade of inflammatory responses. As arteries lose flexibility and lesions occur, IL‑6 increases leading to further inflammation.

The link between chronic inflammation and cancer has long been recognized since the 19th century German pathologist Rudolph Virchow first hypothesized that the origin of cancer was at sites of chronic inflammation. Now it seems that modern science has caught up with the observations of the 19th Century. Considerable advances in cancer research relates to the role of inflammation in the development of cancer. Research in 2003 demonstrated that there is a link between inflammation and tumour growth 12. In 2010 several piece of the puzzle came together when researchers reported they could definitively show that inflammation in the breast is key to the development and progression of breast cancer 13. In an earlier study, women with high levels of two markers of inflammation―C-reactive protein and serum amyloid A―were two to three times more likely to die early or have their cancer return than women with lower level 14.

Now there is a large body of evidence that chronic inflammation is involved in all stages of cancer development. Generally inflammatory white blood cells (leukocytes such as neutrophils; monocytes, macrophages and eosinophils) mediate the growth of inflammation associated cancer, although other cells including cancer cells are also involved 15,16. Animal testings provide strong evidence that chronic inflammation contributes to the promotion of cancer 15 and through suppression of the immune system it allows the outgrowth and proliferation of malignant cells 17. Inflammation affects the micro environment of the cancer; it increases malignant growth 17; may alter blood flow processes; and the cancers response to remedial substances and hormones 18.

There is now convincing evidence that carcinogenesis often evolves as a progressive series of highly specific cellular and molecular changes in response to induction of constitutive over-expression of COX-2, an enzyme responsive for inflammation, and the prostaglandin cascade in the ‘inflammation of cancer’. Molecular studies reveal that over expression of COX-2 is a prominent feature of virtually every form of cancer while the expression intensifies with stage at detection, cancer progression and metastasis. It appears that COX-2 expression is not only an early event in the genesis of cancer, but is required throughout the entire evolutionary process of cancer development

In support of this back in 2005 Prof. Houghton 19 and her colleagues found that an infection with Helicobacter felis (a bacterium related to infectious Helicobacter pylori in humans) which causes a large amount of inflammation leads to an influx of bone marrow-derived stem cells (BMDCs), as the body tries to repair the injury caused by the infection. They were able to show that this transformation of BMDCs is the event that actually sparks malignant tumors of the stomach. They showed that bone marrow-derived stem cells attempt to participate in repair but, under conditions of inflammation and oxidation, are unable to behave normally and instead progress towards cancer. BMDCs have other cancer-like properties, including: the capacity for unlimited growth and the ability to avoid apoptosis (programmed cell death) signals. These properties give them a significant growth advantage making them difficult to control once they have mutated. the BMDCs, depending on environmental cues for development and differentiation, encounter an abnormal environment of conflicting growth signals. There follows a downward spiral of metaplasia (the conversion of normal to abnormal tissue); dysplasia (emergence of a precancerous growth); and finally carcinoma (frankly malignant cancer, capable of metastasizing). It appears that cancers are just the body trying to adapt to a toxic internal environment of inflammation and oxidation.

Depression itself is not a disease, but a symptom of an underlying problem. A new theory called the “Immune Cytokine Model of Depression” holds that depression is not a disease itself, but instead a “multifaceted sign of chronic immune system activation”, inflammation. Instead depression may be a symptom of chronic inflammation. And a large body of research now suggests that depression is associated with a low-grade, chronic inflammatory response and is accompanied by increased oxidative stress. Not a serotonin imbalance.

Researchers discovered in the early 1980s that inflammatory cytokines produce a wide variety of psychiatric and neurological symptoms which perfectly mirror the defining characteristics of depression 20. Cytokines have been shown to access the brain and interact with virtually every mechanism known to be involved in depression 21 including neurotransmitter metabolism, neuroendocrine function, and neural plasticity.

This is now supported by increasing lines of scientific evidence 22 including:

There is further support from large epidemiological studies. A number of longitudinal studies have now shown that inflammation in early adulthood predicts depression at a later stage in life. In a large longitudinal study the risk for depression and psychotic experiences in adolescence was almost 2-fold higher in individuals with the highest vs the lowest levels of of inflammation as indicated by interleukin-6 (IL-6) levels in childhood. Children who were in the top third of IL-6 levels at the age of 9 years were 55% more likely to be diagnosed with depression at the age of 18 than those with the lowest childhood levels of IL-6. Children in the highest tertile of IL-6 levels at the age of 9 were also 81% more likely to report psychotic experiences at the age of 18 25.

Perhaps this is a message that we need to start acting now and early with children to avoid the epidemic of inflammation and chronic illness including depression everyone is predicting for the future.