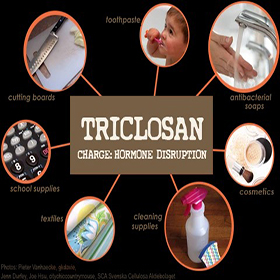 Triclosan is another one of those chemicals that is finally on its way out even though we have known of its toxic effects for decades. After many decades of scientific scrutiny many companies are now removing TCS. Colgate removed triclosan from its Soft-soap liquid hand soaps and Palmolive antibacterial dish liquid in 2011. Unfortunately, the big companies still deny it is a problem but are phasing it out because of public concerns citing “changing consumer preferences and superior formulations”. Interestingly most of the research now shows it is not even effective in what it does.

Triclosan is also used as a preservative, fungicide, and biocide in household cleaning products and is infused into other household items such as kitchen utensils, cutting boards, kitchen wipes, mop heads, computer equipment, clothing, air filters, flooring, toys, bedding, and trash bags (Fang et al 2010). Research suggests that beyond its use in clinical applications (in hospitals) and toothpaste to prevent gingivitis (Gunsolley, 2006) there is questionable evidence that triclosan provides any extra benefit in other consumer products (Tan et al 2002). In 2001, a national survey detected triclosan and triclocarban in 76% of liquid soaps and 29% of bar soaps (Perenceivich et al 2001) whereas now it is likely to be in less than 10-20% of these products. However, as we have already seen many times, what is on the label is not always what is in the products and it has been detected in conventional dish liquid products at low concentrations, although it was not listed on the product labels.

Because of such widespread use in cosmetics, personal care and cleaning products TCS is one of the more frequently detected and highly concentrated contaminants in aquatic and terrestrial environments particularly in drinking water (Dhillon et al Int J Environ Res Public Health. 2015). Triclosan was among the top seven organic wastewater contaminants found in samples from a network of 139 streams across 30 states by the U.S. Geological Survey (Kolpin et al 2002). Looking at the chemical structure of TCS implies that it may have chemical properties related to many toxic compounds, such as polychlorinated biphenyls (PCBs), polybrominated diphenyl ethers (PBDEs), bisphenol A (BPA) and dioxins (Allmyr Sci Total Environ. 2008).

Use of these products, which typically contain 0.1 to 0.3% of the compound, results in absorption through lining of the gastrointestinal tract and mouth, and through the skin (Bhargava etal Am. J. Infect. Control. 1996; Dann and Hontela J. Appl. Toxicol. 2011)

Given the prevalence of triclosan in the environment, it is not surprising that measurable levels have been detected in just about every person even if you don’t use products with it on the label (Casas et al 2011, Philippat et al 2014). TCS absorption and distribution are rapid in humans and detectable levels have been found in body fluids such as amniotic fluid, blood, breast milk and urine (Allmyr et al. Sci Total Environ. 2006, Philippat et al. Environ Health Perspect. 2013) and TCS was detected in 100% of urine and 51% of cord blood samples in pregnant women in 181 expectant mothers from New York (Pycke et al Environ Sci Technol. 2014). TCS was also found in human tissues such as adipose tissue, brain, liver and nails (Geens et al.2012). The high TCS concentrations in the tissues relative to the environmental concentrations suggests that TCS bio-accumulates and is distributed all through human tissues. Other chemicals such as Propylene glycol, which is commonly found in the same product, has been shown to increase skin absorption of TCS (Fang et al. 2014).

Moreover, TCS has been detected in amniotic fluid, indicating that TCS can enter the fetal environment through the placenta (Philippat et al 2013). Fetal life is considered a particularly vulnerable period for exposure to EDC’s because hormonal disturbances during organ development may introduce irreversible changes (MacLeod et al 2010). Studies on pregnant rats have also reported the greatest bioaccumulation of TCS was observed in the placenta and that the hormone disruption might subsequently affect fetal development and growth (Feng et al. 2016).

In the U S, about two-thirds of 90 girls surveyed, aged 6–8 year olds had detectable TCS in their urine (Wolff et al. 2007). Among some Chinese school children aged 3–24 years old, higher TCS levels in urine were reported among females than their male counterparts. 93 % of those between 18 and 24 years had detectable levels (Li et al. 2013). Interestingly, in one study triclosan concentrations were a factor of 2 higher in Australian serum than in the Swedish plasma samples (Allmyr et al. (2008) most probably due to the discouragement to use triclosan containing products by the Swedish government and the lack of concern from the Australian authorities. Samples collected around Australia were remarkably homogenous with little differences between various groups showing they all appear to have a high exposure.

Breastfeeding infants represents a major route of exposure to TCS. In highly industrialized countries elevated concentrations breast milk are common (Dayan 2007). This is a major concern because of their immature metabolizing pathways of infants makes them particularly vulnerable to the negative impact of TCS. Not to mention they may be relying on just one source of food. Moreover, levels of triclosan in breast milk may be increased by underarm cosmetic use, which presents a direct dermal route of exposure to underlying epithelial tissue (Darbre, Best Pract. Res. Clin. Endocrinol. Metab. 2006) and a study of Swedish women who are users of personal care products containing triclosan had higher concentrations in milk and serum than women who use similar personal care products that presumably contain no triclosan (Allmyr et al. (2006) showing that personal care products containing triclosan were the dominant, but not the only, source of exposure to triclosan.

Similar to all the research on the other EDC’s the latest science has shown that even small doses of certain chemicals can significantly affect hormone functions, if they are delivered at the wrong moment. The endocrine-disrupting properties of TCS including its effects on estrogen, testosterone activity and disturbance of thyroid hormone action (Arancibia et al.2009, Crofton et al. 2007; Henry and Fair 2013; Jung et al. 2012; Schiffer et al.2014, Paul et al 2010, Rodriguez and Sanchez 2010, Rotroff et al 2010) has been shown to occur at concentrations typically found in the studies on humans and the environment (Foran et al Mar Environ Res. 2000).

Because of its widespread environmental contamination many studies have been done on aquatic species show the same type of results. In a study on toads TCS exposure not only resulted in delayed growth and development but also caused birth defects in the animals embryos, and the developmental effects of TCS at high concentrations may be associated with disruption of the thyroid (Chai et al Ecotoxicology. 2016). Another study on tadpoles exposed to TCS developed into smaller froglets and had malformed legs (Helbing et al 2006 Aquatic Toxicology). In humans, recent studies have shown an increasing number of potential birth defects. In a study of 520 male newborns, prenatal triclosan exposure was inversely associated with prenatal growth parameters at week 33 and was statistically associated with reduced head circumference at birth (Philippat et al 2014). In another study prenatal TCS exposure was associated with reduced head and abdominal circumference at birth (Harmer Lassen,et al 2014 Environ Health Perspect)

During the last decade, there has been a remarkable and unexplained increase in the prevalence of asthma. Some have hypothesized that widespread use of antimicrobial ingredients such as TCS may be a contributing factor. This concept is based on the hygiene hypothesis, which proposes that lack of pathogen exposure during development can alter the usual development of the immune system by eliminating or changing the commensal microbiota. But also for the potential of these antimicrobial products to alter the gut microbiome which is so important for the development of the immune system.

There are also increasing evidence of TCS-induced allergic reactions in humans. Dermatitis following prolonged use of TCS-containing hand washes (Wong and Beck 2001) or when further exposed to sunlight after use (Schena et al. 2008) have been recorded. Similarly, blisters were known to have erupted in the mouth and on the lips of human subjects following prolonged use of TCS-containing toothpaste (Robertshaw and Leppard 2007). A study conducted between 2003 and 2006 found a positive association between elevated urinary TCS levels and allergy or hay fever diagnosis, and concluded that TCS may negatively affect the immune system (Clayton et al 2011). A more recent study using data from 860 children obtained from the 2005–2006 National Health and Nutrition Examination Survey found levels of urinary TCS was positively associated with allergies and food sensitization (Savage et al 2012). Another study also found that skin exposure to TCS in the presence of an allergen can augment the allergic response to that allergen (Anderson et al Toxicol Sci 2013).

TCS is known to have a negative impact on β cells in the pancreas which impacts on insulin synthesis and function and ultimately contributing to diabetes (Pi et al.2007). Its negative effect on the power house of the cells, the mitochondria may also be a contributing factor to diabetes (Ajao et al 2015).