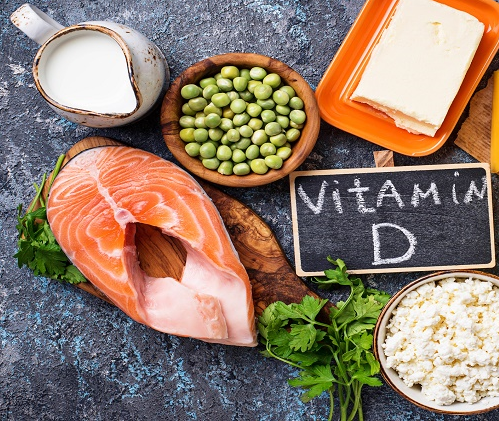 Vitamin D is one of the essential nutrients required by the human body. Now more than ever. Unlike most vitamins, it is one that we can manufacture on our own, given the right conditions. Despite this, vitamin D is showing up increasingly in populations as the most widespread and critical nutrient deficiency; this deficiency is linked to many diseases and disorders, costing billions of dollars each year. Our changing lifestyles, including increased indoor living and campaigns warning people to stay out of the sun have meant that most people don’t get enough vitamin D. The resulting deficiency is compounded by the consumption of modern and processed foods devoid of any vitamin D.

Vitamin D refers to two biologically inactive precursors: D3, also known as cholecalciferol (made from cholesterol), and D2, also known as ergocalciferol. Vitamin D is the only nutrient that can actually be synthesized by the human body, which technically means that it is not a vitamin. The synthesizing of vitamin D in the body can be achieved through contact with solar ultraviolet B radiation emitted by the sun. Without the presence of this solar radiation the only way to get vitamin D is through diet—hence, it is still classified as a “vitamin.”

It is becoming increasingly common to find low levels of vitamin D in Western populations. Vitamin D uptake from the sun is not affected so much by seasonal changes but by how much time people spend in the sun. People require between 70nmol/L to 100nmol/L of vitamin D and in winter, when people spend less time outdoors, it is difficult to achieve these levels. Furthermore, current sun avoidance advice combined with the dietary habits of the general populous make the situation much worse—the average level in adults is around 25nmol/L – not even half the recommended level. Populations particularly at risk are seniors and infants but also any person spending too much time inside.

In addition to vitamin D obtained through UVB exposure to the sun, this vitamin can be found in foods such as eggs, butter and fortified milk, with the highest levels found in fish. Remember, we evolved as fisher- hunter gatherers and fish used to be an essential part of our nutrition. Vitamin D can also be provided by supplements. Numerous studies have concluded that sensible sun exposure and supplementation are the most effective ways of increasing vitamin D levels.

Once in the body, vitamin D is either stored in the body’s fat adipocytes or enters the liver. The vitamin D gets broken down in the kidneys for the regulation of calcium and dozens of metabolic functions. The broken-down vitamin D then interacts with vitamin D receptors in the small intestine and on osteoblasts to regulate calcium and phosphorous metabolism. It not only assists calcium uptake in the bones but also works as an immunity modulator. It continues to be metabolised in various tissues and cells for regulating cellular proliferation and differentiation as well as in the functioning of the immune system and macrophages. In addition, circulating concentrations of the broken-down vitamin D may help increase insulin production and alter fat metabolism.

Deficiencies in vitamin D have been linked with a range of problems with the musculoskeletal system including low bone and muscle problems, as well as cardiovascular disease, diabetes and metabolic syndrome, cancer and impacts on the immune system, Parkinson’s Disease, asthma, pain, and pre eclampsia.

Low levels of vitamin D can reduce the amount of calcium uptake in the bones which, over time, can lead to a loss in bone density. Pregnant women with vitamin D deficiency have been found to give birth to children who are at greater risk of being unable to store calcium in their bones, reducing their bone density and increasing the risk of bone fractures. In addition, these children experience higher level of dental caries. Low vitamin D in children will prevent them from reaching their bone mineral density and therefore increase their risk of osteoporosis and fracture later in life. In a study of 206 pregnant women during their second trimester, researchers reported that only 10.5% of the women had adequate levels of vitamin D.

In a study of 23,423 would-be first time mothers, the risk of pre-eclampsia was 27% lower in women who consumed vitamin D supplements with daily doses of 10 to 15 micrograms, compared to women who did not take supplements. Pre-eclampsia, affecting 2% to 3% of all pregnancies is estimated to be responsible for about 60,000 deaths each year worldwide.

Vitamin D deficiency is inversely related to a range of diseases, including respiratory infections such as influenza. In support of these findings, clinical trials have shown that vitamin D supplementation can reduce the risk of reactivation of latent tuberculosis infection. Vitamin D (in particular, D3) stimulates neutrophils, monocytes (natural killer cells) and the epithelial cells lining the lungs and protecting them from infection. So come winter-time and flu season get out and get a bit more sun along with some cod liver oil.

Studies have indicated that vitamin D supplementation may reduce the risk and difficulties associated with autoimmune disorders. In particular, there is strong evidence that vitamin D reduces the risk of multiple sclerosis and type 1 diabetes mellitus, and weaker evidence for rheumatoid arthritis, osteoarthritis, systematic lupus and erythematosusstar. There is no doubt about the link between vitamin D shortage and multiple sclerosis. There is a 41% decrease in MS risk for every 50 nanomoles per liter increase in 1,25-hydroxyvitamin in the blood. Vitamin D deficiency also predisposes to insulin resistance and pancreatic beta cell dysfunction. In a study of 10,366 Finnish children those given 2,000 IU of vitamin D3 per day throughout the first year of life experienced a 78% reduced risk of type 1 diabetes.

Over time, vitamin D deficiency leads to osteopenia, precipitates and exacerbates osteoporosis, which causes the painful bone disease osteomalacia and leads to increased muscle weakness. Notably, vitamin D deficiency is also associated with an increased risk of falling and fractures. Frail older people confined to institutions may sustain fewer hip fractures if given vitamin D.  A study of 302 women (average age 77.2) living in Perth, Australia found after 12 months of supplementation significantly more falls in the placebo group than in the vitamin D2 group (62.9% versus 53%, respectively). A study of 124 nursing home residents taking a daily vitamin D supplement of 800IU for five months reduced the number of falls among nursing home-dwelling elderly people by 70%. Lower blood concentrations of vitamin D increase the likelihood of hip fracture among menopausal women by up to 70%.

Vitamin D deficiency increases the risk of “all-cause mortality” and is associated with a 122% increase in the risk of “cardiovascular mortality” compared to the highest average Vitamin D levels. Researchers also found that low levels were linked to higher levels of inflammation markers, such as C-reactive protein (CRP) and interleukin-6 (IL-6), which are important markers for chronic illnesses, including cardiovascular disease (These inflammation markers are a much better predictor of cardiovascular disease than cholesterol levels).

Deficient or insufficient vitamin D levels have been documented in patients with myocardial infarction, stroke, heart failure, and peripheral arterial disease. A study of 13,331 initially healthy men and women found that low levels of vitamin D may increase the risk of death from all causes by 26% when the lowest and highest average vitamin D levels were compared. In an examination of 1,739 participants in one study, low levels of vitamin D were associated with a 62% increased risk of cardiovascular events like heart attack, heart failure or stroke. The study also found that 28% of subjects had blood levels lower than 15 nanograms per millilitre (ng/mL). Only 10% of the participants had levels in the optimal range above 30 ng/mL.

A number of studies have also shown a link between low vitamin D and diabetes and metabolic syndrome. In a study of 15,088 subjects Vitamin D levels were inversely associated with hypertension, diabetes mellitus and hypertriglyceridemia. Other cross-sectional studies have confirmed the links between vitamin D deficiency and both hypertension and diabetes. One study reported that a daily intake of 800 IU of vitamin D compared with a daily intake of less than 400 IU of vitamin D reduced the risk of type 2 diabetes by one-third. A number of studies have shown a close link between vitamin D deficiency and metabolic syndrome. Vitamin D appears to be necessary to maintain adequate apolipoprotein A-I concentrations, the main component of HDL (good) cholesterol. One study found similar results with the lowest levels of vitamin D being associated with a 31% prevalence of metabolic syndrome, compared to only 10% for people with the highest average levels. The results also showed that vitamin D blood levels were associated with HDL cholesterol levels. Each increase of 10 ng/mL in 25(OH)D was associated with an increase of 3.8 to 4.2 mg/dL in HDL-C. An increase of just 1 mg/dL increment in HDL-C is associated with a 4% to 6% reduction in coronary heart disease risk.

There is now overwhelming evidence that supports increased vitamin D to lower the risk of developing and dying of prostate, breast, colon, ovarian, esophageal, non-Hodgkin’s lymphoma and a variety of other lethal cancers. In a 10-year study of 1,179 healthy, postmenopausal women, researchers found that those taking large amounts of vitamin D3 had a 60% or higher chance of not getting cancer compared to their peers. In a review of data from 177 countries, extrapolation of results showed that as many as 50% of breast and colon cancer cases could be prevented by increasing vitamin D intake. According to the study, the median adult intake of vitamin D in the US is only 230 IU per day, versus the researchers’ recommended 2000 IU per day. For every increase of 25 nmol/L in people’s blood, there was a 34% cancer risk reduction, with the most common cancers being those of the lung, colon and pancreas.

Vitamin D can protect women with pale skin from breast cancer and it can reduce the risk of pancreatic cancer especially in young men. In fact vitamin D appears to reduce the risk of other cancers as well such as colon-, prostate-, Hodgkin’s Lymphoma and lung cancer. A recent study of vitamin D intakes found increased intakes of the vitamin were associated with a 24% reduction in the risk of developing estrogen and progesterone positive breast tumours.

One explanation for cancers being reduced by vitamin D is vitamin D receptors (VDR). These are found in the tissues of the body and help maintain cellular growth and prevent cells from becoming malignant. Studies on both colon cancer cells and healthy prostate cells have demonstrated protective effects of vitamin D at a cellular level.

Vitamin D deficiency is widespread in developed countries such as the US, UK, Australia, New Zealand and Europe. US studies have found vitamin D deficiency is present in approximately 30% to 60% of the general population. Increasing vitamin D levels just a small amount would outweigh the benefits of most of the medication people take for chronic illness including medication taken for cardiovascular disease.

Considering the evidence, there is an overwhelming agreement between vitamin D researchers that current recommendations of 200 IU per day for children and adults up to 50 years of age for vitamin D need to be increased to 800 IU to 1000 IU vitamin D3. Numerous studies have shown supplementation to be effective in raising blood levels of Vitamin D levels with no evidence of intoxication reported in either the short- or long-term trial.

Sensible sun exposure (or UVB irradiation) along with supplements are required to satisfy the body’s vitamin D requirement. To achieve adequate levels of vitamin D we need to get one to two hours of sensible sun exposure a day. While it is prudent to avoid too much sun it is important to remember that the costs of vitamin D deficiency far outweigh the cost of skin cancer and some sun may also be necessary to reduce skin cancers. Remember, we did evolve in the sun but not all day, especially for those with fair skin.